EV Charging on Public Land will be discussed in this article. Ben Moss, a state legislator from North Carolina, made headlines a few weeks ago.He proposed a law that would provide $50,000 to demolish no-cost charging stations on public property unless no-cost gasoline and diesel pumps were also placed there.

Let’s summarise before we even get into the weeds of this discussion.On public lands in North Carolina, there are free (likely level 2) chargers that may increase an EV’s range by a few miles per hour.They’re more likely at parks, rest areas, and other places where people and cars congregate.Moss is so enraged by this situation that he would rather spend up to $50,000 destroying these stations than allow some people to charge their cars.

Let’s be honest: this is a ploy to get attention.This exceedingly dumb piece of law was covered in dozens of newspapers.Moss could be receiving abuse from anyone who can put a few words together in a sentence, but he will win over some new supporters.These folks will donate money to him so that he can win reelection, which is probably his true objective.Incite wrath, garner attention, use the anger to raise money, and repeat.In essence, it is how politics operates.

Aside from the dismal condition of politics, other states, counties, and towns might also pass legislation of this nature.”It’s not fair for EV drivers to get anything for free on public land while gas-powered vehicle owners have to suffer at the pump,” is the central message of the campaign.

So, if this strange style of thinking spreads to your neighbourhood, here are some ways to discuss it.

Everyone will raise a stink about taxes, how our taxes are utilised to pay for these fees, and how much electricity is being used.Remind them that not all citizens can or will use the services provided by taxation.Consider rest stops.In the past 20 years, I’ve visited maybe three rest areas.The free restrooms, information, picnic tables, and, well, a place to rest are all available at these reachable roadside locations.Taxes are being paid for something I never use.For those of us who would rather visit a truck stop to buy beef jerky, all that electricity and upkeep doesn’t seem fair.

All those schools I keep seeing around town are likewise paid for by me.I am not a parent.Why should I pay for the choices made by humans who choose to reproduce?Considering all the stuff I pay for but never use, I could go on forever.Is it just?In actuality, it is.To support a functioning society, we pay taxes.Whether we are paying too much or too little is a very different debate that, in my opinion, has no bearing on the situation at hand.

But It’s Really Not Fair

It is absurd how much stupidity is involved in requiring that a free charging station also have a free petrol station.
Let’s discuss infrastructure a little.

There is electricity almost everywhere.It’s how humans do things, and when a city is being built out or expanded, guess what is added to those new locations.electricity, as you probably thought.Therefore, when a town constructs a park, they ensure that there is electricity available there for lighting, maintenance sheds, and those summertime jam band events.A relatively easy update is to install a charging station in a park’s parking lot that already has electricity. 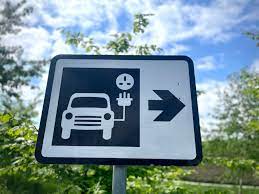 Digging a hole will be necessary to install a gas pump.Ah, so you need to fill the hole with a tank.Oh, and don’t forget the huge tanker truck needed to fill up that tank with more fuel.additional free gas.It won’t simply be parents taking their kids to the park to play, though.The entire state will line up as soon as word spreads about the free gas.Free electricity, perhaps?When in use, it will run taxpayers a few cents per hour.Gas for nothing?The town will become bankrupt as a result.

Few actions we can take will have a greater influence on our foreign policy and increase national security than reducing our dependency on foreign energy.The EV chargers are American-made.They make use of domestically produced electricity.These utility firms are staffed entirely by Americans.

That petrol station?That’s a big ball of wax, which US oil firms may or may not supply.However, they are undoubtedly connected to a bigger oil system that is impacted by the whims and conflicts of other nations (including ours).

It’s true, but this argument probably won’t be of any use to you.Not only do we need to develop the infrastructure, but we also need to do it in order to allay public worries about EVs.A vehicle often gains only a few miles per hour from using a free public charger (or any free charger).When you return to your plugged-in EV after spending two hours at the Cheesecake Factory, you may find that it has added about 10 miles to its range.

The expanded range adds some good value to your day.It’s more crucial that people considering EVs see charging outlets in the real world when they travel.Show people that the switch to electric vehicles isn’t as frightening as some would have you believe, whether it’s at a nearby park or Dave and Busters.

Sadly, we are forced to pay attention to politicians like Moss.They’ll keep shouting about EVs because it’s a great way to draw attention without actually addressing any issues that their constituents are actually facing.There is an odd myth that EV would ruin the grid and are worse for the environment than conventional vehicles.

All of this FUD (fear, uncertainty, and doubt) is the result of people behaving just in their own self-interest rather than considering the long term.