And trying to sync any device with a Mac is really annoying and takes a lot of time. To solve this problem, Eltima has made a program called SyncMate. It’s a pain in the you-know-what to sync devices on a Mac.

So many Mac and Windows users hate that they have to use iTunes to sync their iPods and iPhones. It’s an obstacle, and it needs to go!

Simply put, offers a drag-and-drop, all-in-one way to synchronize a wide range of real and virtual devices with Mac. These devices can be Android, iOS, other Mac computers, cloud storage services like Dropbox, Google Drive, etc., MTP devices, and a lot more. 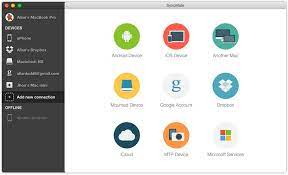 Without SyncMate, you would have to look at a number of unreliable “free” ways to connect these devices to your Mac that don’t involve iTunes.

Another option would be to pay at least $100 or more for all of the services separately to get the same result. The Mac app store only charges $39.95 for SyncMate Expert Edition, which is a paid version of the “free” SyncMate.

This software has an easy-to-use interface and can sync bookmarks, calendars, reminders, and contacts from Safari, iTunes, and iPhoto. It also copies SMS messages so you can read them and search through them.

It also lets you delete all contacts, calendar events, and tasks that are on an iOS device or another Mac computer, which is a great feature. Lastly, you can look through the call log on your iPhone right on your Mac. SyncMate works with Android devices as well as iOS devices.

Once you’ve synced your Android device with your Mac via Bluetooth, Wi-Fi, or USB, you can read, write, send, or delete messages. Think about all the ways you can move files with the simple “drag and drop” feature.

With SyncMate 7, you can do more and have less trouble with this software. With SyncMate for Android, you can get your personal information, media files, folders, and bookmarks from your Mac.

Also, Android devices can be mounted as Mac discs, which lets you browse their contents like you would any other local disc. In other words, SyncMate is a way for Mac users to move files from Android to Mac.

Which Android devices can be synced using Android SyncMate?

Who is SyncMate useful for?

Just about everyone. As we’ve already said, Mac doesn’t make it any easier for iOS devices (iPhone, iPod) to move data between the Mac and the device. So, even if your Apple devices are already synced to your Mac, SyncMate lets you “mount” them as a local disc and keeps you from having to use iTunes, which is always a good thing.

Even though the Android market is big and most work is done on phones anyway, SyncMate for Android is still a useful tool for freelancers, small business owners and entrepreneurs, and even large companies.

With the Expert edition, you do everything included in the free edition, and sync-

You can see an entire list of synchronization options for your Mac with multiple devices.

SyncMate is software that is easy for people of all ages to use and set up. It is also a quick and easy way to sync devices of different makes and models with Mac computers. At the moment, there aren’t that many solutions like SyncMate that work well and don’t cost too much. This software can be used on up to 2 Macs for only $39.95.

We hope that this review of Syncmate will help you decide and buy it.

Why M1 MacBook Air Might Be Apple’s Most Practical Laptop