This article will show how to use a free HTML editor. Do you intend to make regular changes to WordPress files or create your own custom plugins and styles? A code editor will be required if you wish to work with HTML and CSS. When you’re dealing with a lot of code, HTML editors may make your life a lot simpler. Shows is difficult enough as it is, but a bad user interface makes it nearly impossible to succeed. Setting up a free HTML editor gives you additional features, a better user interface, and the capacity to handle code properly.

What is an HTML Editor?

The code that regulates the internet is HTML or Hypertext Markup Language. It’s a markup expression, which means it makes use of tags to indicate components, such as highlighting text or displaying pictures using code.
HTML is commonly combined with CSS and JavaScript to make it as easy to use, learn, and understand as possible. Because HTML has a low learning curve compared to other languages, most web developers begin by studying it.
Opening Notepad on your computer, entering some markup, and saving it as an.html data may be as simple as that. You may even paste the data into your web browser to see how it looks.

However, if you want to make significant progress, it isn’t exactly a fantastic service. Coding in a poor editor will rapidly become a migraine-inducing headache. This isn’t a situation where a simple word processor will suffice.
As a result, several designers have created code-editing software. Additional features such as syntax highlighting, autocomplete, and error detection is included in these tools, making programming with large quantities of complex code easier.

HTML editors, in particular, are designed specifically for web designers and include capabilities that are tailored to their needs. They are a necessary component of your web development toolset since they generally function with other web languages such as JavaScript, PHP, and CSS.

Why Do You Need an HTML Editor?

WordPress has its own HTML user interface that functions similarly to standalone code editing programs. You don’t need to download a dedicated HTML editor if you just change the code on your WordPress site once in a while.

However, this is only a viable solution if you’re making direct changes to your site’s current pages. What if you wish to create your own HTML pages/elements or write your own WordPress themes and plugins? This browser-based user interface will fail miserably.

If you want to get started with WordPress site development, you’ll need standalone, downloadable HTML editors. They have a decent, configurable UI as well as capabilities that may be very useful to developers. Some editors also feature FTP functionality, allowing you to modify site files and publish them to your site right away.
Let’s face it: creating plugins and themes with Notepad is impossible. If you wish to create something from scratch, the WordPress editor will not function. To do the task, you will require a professional program.

What to Watch for in an HTML Editor

Because each designer has their unique style, selecting an acceptable HTML editor is a personal decision. You’ll most likely have to test a few before you discover one you like. Meanwhile, here are a few things you should look for in any editing user interface. Platform/operating system and ongoing advancement are two important factors to consider.

Keep in mind the environment you’re working in: certain editors are only available for Linux or Windows, and Mac support is patchy at best. Examine the program’s platform support on a regular basis, especially if you operate on numerous computers with various operating systems.

– Syntax Highlighting/Color Coding: Highlighting is almost anticipated in HTML because of the tag-based markup style. Syntax highlighting illuminates games so you can see what they are at a glance, and it makes dealing with code blocks a lot easier.
– Version Control: Look for variation control capabilities that save earlier versions of your code case you ever need to roll back a modification or see a prior variation of your code. When dealing with other designers, this is almost a must.
– Autosave: It’s a bummer to lose work, so seek editors that include autosaving options in case the application fails.

– Autocomplete and Suggestions: Autocomplete in an HTML editor allows you to quickly fill up lengthier code by hitting a button when an idea comes to mind. It may also generate closing tags right away.

– Code Folding: When working with a large file, code folding allows you to hide irrelevant sections of the document and concentrate on certain areas.

– Many Cursors/Simultaneous Editing: The multi-cursor feature allows you to write code in multiple places at the same time. When adding duplicates of the same tag, this is quite useful.

– Find and Replace: No code editor is complete without the ability to search for and replace specific strings. This is especially crucial since that HTML is continuously updating its standards and deprecating inefficient tags.

– Error Detection: HTML does not assemble since it is a markup language rather than a display language. This indicates that you will not be able to test your code. It’s critical to have live error monitoring so you can see right away if you’ve made a mistake.
– FTP Support: If your HTML editor supports FTP, it will be able to connect to WordPress and upload any changes you make. You won’t have to log into FileZilla and your favorite FTP client every time you want to accomplish anything. 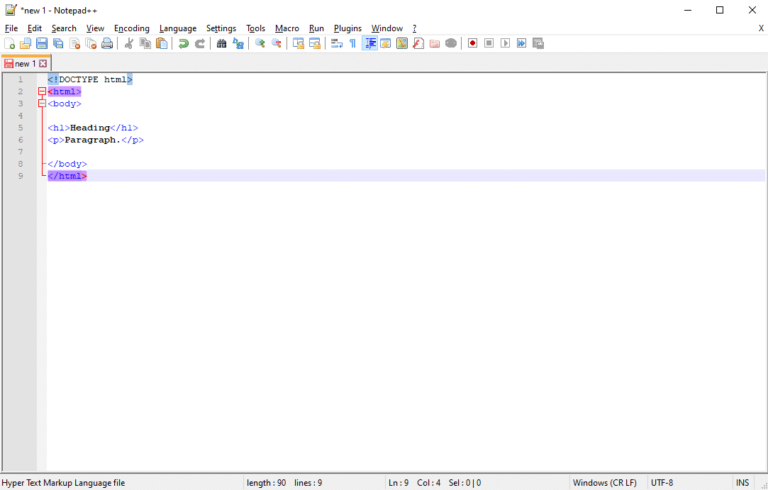 Notepad++ is a text and code editor for Windows that is known for its lightweight design. This is usually the first tool a developer would use because it is basic and easy to use while still providing a wealth of capabilities to make your life easier.

Notepad++ supports a wide range of languages, including HTML, CSS, PHP, and JavaScript. As a result, it supports all of the languages that a WordPress designer will require. And, given that it has been actively improved since its introduction in 2003, you can be assured that it will be maintained for many years to come.

Autosave, locate and modify, split-screen view, simultaneous editing, and a slew of other useful features, such as third-party plugin compatibility, are all included in the software. Notepad++ is fantastic for novices, yet it has enough quality to last you through your career as a web developer. 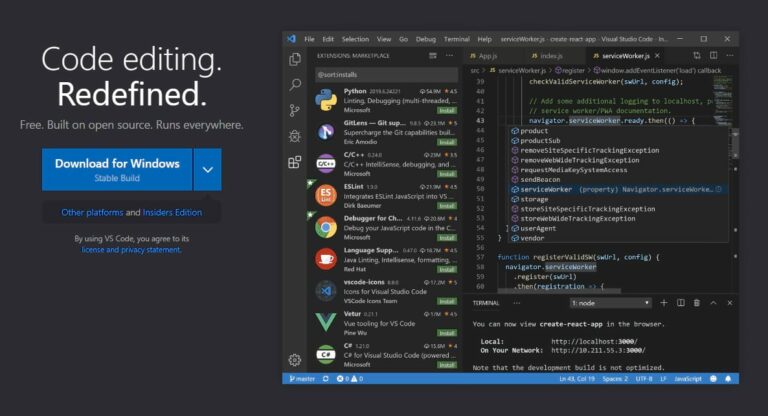 Despite its relatively recent introduction in 2015, Visual Studio Code remains the go-to for many designers as one of, if not the most popular, code editors out there. It’s quite powerful and customizable, with a user interface that you may customize to your taste and extensions that add a slew of new features.
You’ll never have to switch tools because the editor supports HTML, CSS, JavaScript, and PHP. It also has smart IntelliSense for syntax highlighting and autocompletion, as well as support for Git/Github version management and FTP.

Last but not least, VSC is compatible with Windows, Mac OS X, and Linux, allowing it to be used by almost anybody. Because this application has so many capabilities, it might be overwhelming for inexperienced designers. However, if you learn to use it, you’ll have virtually all of the tools you’ll ever require. 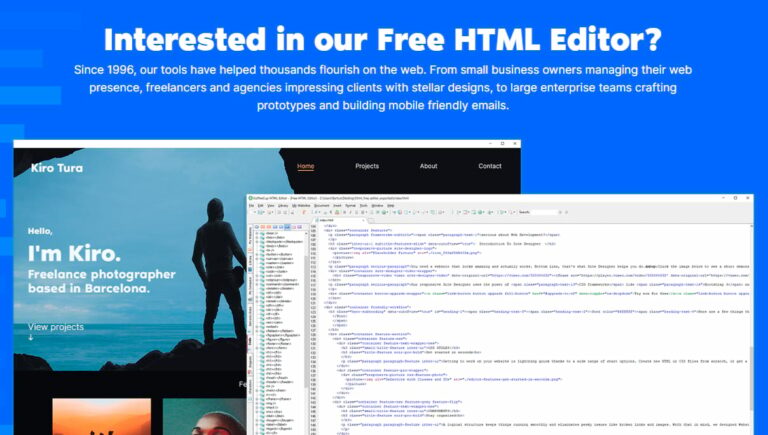 Are you looking for an HTML-specific tool? CoffeeCup Software created the HTML Editor, commercial software for custom web developers, but also released a stripped-down version that is completely free to use.
Some features, such as limitless FTP connections, HTML/CSS recognition, and code cleanup, are trialware only. UI/toolbar customization, code conclusion, and an HTML sneak peek on a simulated web browser are all included, nevertheless. Everything you’ll need is included. It also includes CSS and JavaScript, giving you the whole site-building toolbox. 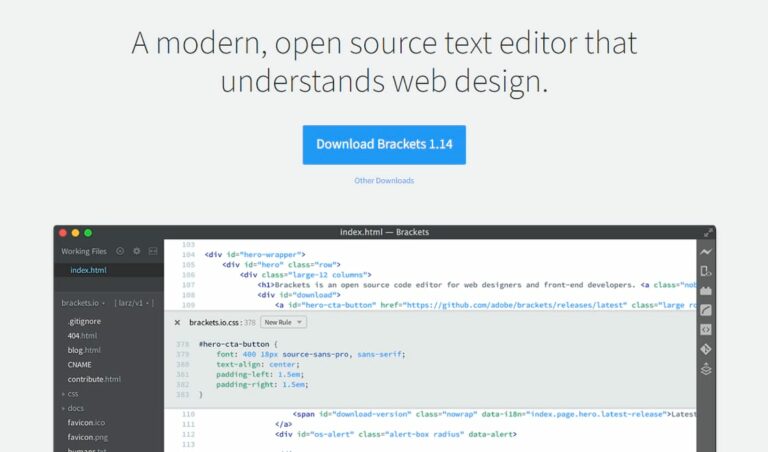 Do you enjoy the lightweight design of Notepad++ but want software that focuses solely on web development? Brackets are the best choice. It operates on Windows, Mac OS X, and Linux, and has just the perfect number of features to provide you a great experience without getting in the way.

The HTML, JavaScript, and CSS editor have a live preview, preprocessor support, highlighting, and extensions to fill in any gaps. It was designed with online expansion in mind, so you know you’ll have everything you need to get started with WordPress. Brackets is a fantastic choice for designers who like their workspace to be simple and uncluttered, with no features they’ll never use. 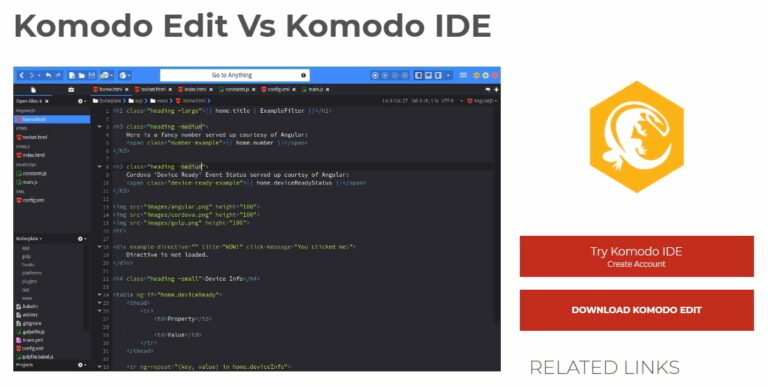 Komodo IDE is an integrated development environment from ActiveState that includes sophisticated features like debugging and platform integrations. If you simply want a more simple, easier-to-use HTML editor, though, Komodo Edit is a good choice. It runs on a variety of operating systems, including Windows, Mac OS X, and Linux versions.

The editor supports HTML, PHP, and CSS and is multilingual. It features autocomplete, multi-selection, and change tracking functions, and you may totally customize its appearance. It’s a solid, straightforward, yet effective choice.

Are you tired of having problems with your WordPress site? With Kinsta, you’ll get the finest and fastest hosting support available! Take a peek at the tactics we’ve devised. 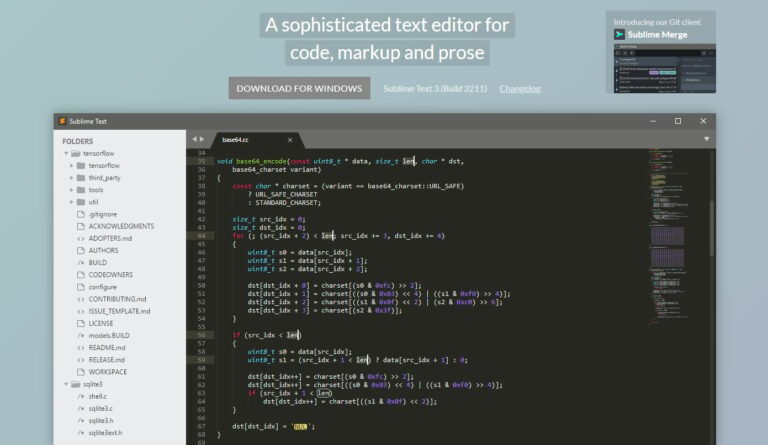 Sublime Text is a code and text editor for Windows, Linux, and Mac that is both smooth and sophisticated. It comes with 23 built-in styles and the ability to customize the user interface in general, as well as support for a variety of markup and presentation languages.
You can use Sublime Text to navigate to certain lines or signs, establish alternative syntaxes, highlight code, select several lines, and divide edit. It also has a searchable command palette, so you don’t have to deal with functions that aren’t used very often. You’ll enjoy Sublime Text if you prefer your coding user interface to be clutter-free and completely customizable. It undoubtedly provides the finest experience (it is, however, my personal preference).

Atom is a collaboration platform created by GitHub, the world’s largest software application and online development community. It comes with built-in Git/Github version management and, most importantly, allows real-time code collaboration. There will be no longer the transmission and receiving of files. Work together on a common goal.
Atom allows themes, third-party plugins, and even the ability to make your own modifications to the UI using HTML and CSS on all major operating systems. It’s fluid, flexible, and feature-rich, and it’s a must-have tool for anybody who needs to collaborate smoothly with others.

TinyMCE, WordPress’ default WYSIWYG editor, is an excellent choice for most users who just wish to make minor changes to their website’s pages. However, if you need to do a lot of HTML code, you’ll need a far better alternative. Working with themes and plugins will be a pleasure if you use a code editor that you enjoy. Not sure which one to choose?

If you like simple and clean user interfaces with a good range of features, Notepad++, Komodo Edit, and Sublime Text are recommended. Choose Visual Studio Code for optimum speed since it focuses on stories and works similarly to an IDE. CoffeeCup and Brackets are built exclusively for HTML web development, HTML editor making them ideal if you need a focused solution. Atom is the way to go if you require collaboration capabilities or simply want complete control over your work environment.

How to Make More Money in the Bitcoin Era