How to watch the five Twilight movies chronologically is covered in this post. Millions of people were moved by Stephanie Meyers’ story, which also featured some genuinely stunning special effects.

Given that the vampire-human love narrative is based on a quartet of books released between 2005 and 2008, there may be some uncertainty over the Twilight movies’ chronological order.Fans devoured Twilight, New Moon, Eclipse, and Breaking Dawn as quickly as a Cullen can move after their release.However, many people were shocked to learn there are five movies. 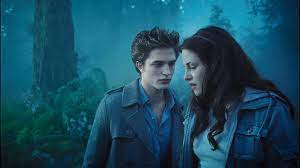 That’s because Breaking Dawn, the most recent book, had to be split into two films.The tale had so much going on that the directors didn’t think they could adequately cover it in one movie.There are two instead.However, it’s still simple enough to watch the films sequentially.The order in which they were released, which is the same order in which the books came out.

Note:
“There were two further books in the Twilight Saga: The Short Second Life of Bree Tanner and Midnight Sun, which told the story of Twilight from Edward’s perspective.Both have not yet been made into motion pictures, and as of the time of this writing, there are no known plans to do so. ”

The turbulent relationship between Bella Swan (Kristin Stewart) and Edward Cullen is introduced in the first film (Rob Pattinson).It looks at the challenges they must overcome in order to be together.

On Bella’s 18th birthday, which is when New Moon starts, Edward’s brother Jasper tries to attack Bella at a party held at the Cullens’ home.Edward tries to leave her for her own good after this incident.As Bella makes an effort to move on with her life, she makes friends with Jacob Black (Taylor Lautner), a mythological creature who turns out to be a werewolf.

Bella must decide between Edward and Jacob in the third instalment of the series, and they must learn to cooperate to keep Bella safe from a deadly vampire out to exact revenge for the death of her mate (during the first twillight movies).

Bella is getting ready to wed Edward in Breaking Dawn, Part 1, which is a requirement for her to turn into a vampire.After the wedding, they take a romantic honeymoon on an uninhabited island before discovering that Bella is unexpectedly pregnant.\Then, even though it poses a threat to her life, Bella must resist everyone to keep the baby with the help of her improbable protector, Rosalie (Nikki Reed).

Bella has given birth to her daughter Renesmee (Mackenzie Foy) and turned into a vampire in Breaking Dawn, Part 2, but she, the child, and the Cullens are now under a new threat.Volturi are on their way.The Cullens, their friends, and the Quileute wolves must get ready for battle in order to save the child’s life.