GeoGuessr is a popular edutainment game that allows you to put your geographical knowledge to the test. It was first released in 2013. You’re probably aware of it if you’re a lover of educational games and applications. It used to be free, but since Google raised the prices of its Maps API, it became premium in 2019. Following the rise, many developers migrated to Google Maps competitors like OpenStreetMap, Google’s mapping capabilities have been preserved by GeoGuessr. However, because of the high price, many GeoGuessr players are looking for the finest free alternatives. If you’re one of them, here are the 10 finest geography-based quiz games available right now, including GeoGuessr. 12

Best Free Alternatives to GeoGuessr You Can Play

We’ll go through the 10 greatest free GeoGuessr alternatives you can play on your PC and mobile device in this article. They all test your geographical knowledge, just like GeoGuessr, but they’re either completely free or include a free version with a limited feature set. So, without further ado, here is a list of games that are similar to GeoGuessr.

City Guesser is a browser game that’s similar to GeoGuessr but uses video instead of the Google Maps API. It’s possibly the greatest free alternative to GeoGuessr. It’s also completely free. A full-screen video of a random location anywhere in the world is shown in the game. When you’re ready, go to the bottom of the page and click the ‘Start Guessing’ button to bring up the map. Make a guess and see how close you are by pressing the green ‘Guess’ button in the bottom-right corner. There’s also a multiplayer mode in which you can compete against your friends. Create a private room or join a public one to get started.

You can choose to play City Guesser using locations from all over the world or focus on a certain country, continent, or region. The United States, Japan, France, Russia, and India are among the options. Major cities, busy places, seaside cities, capital cities, snowy landscapes, and more categories are included on City Guesser maps.

While some videos may provide you with obvious clues as to where you are (such as car license plates), others will require a little more effort. Overall, the game isn’t as difficult as GeoGuessr, but it’s still a lot of fun, thus it’s the best free game on this list.

PlayGeography is a geography-based game similar to GeoGuessr, as the name suggests. It’s from TeachMe, a company that makes educational games and apps for families. It’s a fun way to learn about world geography, but unlike GeoGuessr, it doesn’t have 3D maps or videos. Instead, you’ll be given 2D maps to guess the city, state, country, flags, and other details. It’s more of a “map quiz” game than anything else, and it’s a fun one. PlayGeography, on the other hand, is completely free to play with no limits on how many times per day you can play. 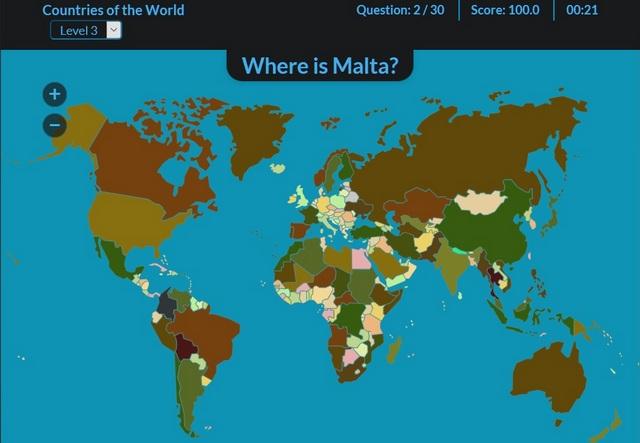 If you want to learn more about the planet while having fun, PlayGeography is a great alternative to GeoGuessr. It’s free, contains more questions than GeoGuessr, and you don’t have to sign up or log in to get started. Overall, we give it two thumbs up for being a fun and healthy way to spend time with family and friends.

GeoGuessr’s free crowdfunded competitor, Geotastic, is the finest. It’s a multi-player geography trivia game that you may play with your friends and family for free. There are several game modes to pick from, including random street views, popular locations, and a flag guessing mode. There’s also a nation-guessing mode in which you must use clues and suggestions to pick the proper country.

Geotastic is free to play, but you must create an account in order to log in and play. In single-player mode, players can establish a local game, or in multiplayer mode, they can join an internet lobby. Only the person who establishes the online lobby requires an account for the latter.

GetLost is another free GeoGuessr alternative that focuses on the United States and India. It’s a game of geographic discovery that employs randomised streetside maps with clues and suggestions to help participants figure out where they are. There are five rounds to the game, and your score is determined by how near your guess is to the actual location depicted in Streetview. The current maximum score per round is 5,000. It, like Geotastic, requires you to register an account before you can begin playing. You have the option of creating an account with your email address or logging in with your Twitter or Google credentials.

GetLost, unlike GeoGuessr, does not include a multiplayer option. The single-player action, on the other hand, is quite engaging, and players can recognise the cities based on street signs, building names, and so on. The game includes places from all around the world, but North America and India appear to be the primary focus. Because of the lack of street signage, most of the sites in India were difficult to guess. The ones in the United States, on the other hand, were a little easier, especially in the cities.

In 2021, Seterra is one of the best free GeoGuessr alternatives for users of obscure languages. It includes fun quizzes that will help you learn about countries, capital cities, flags, rivers, lakes, and significant geological features. There are nine different game modes to test your skills in various ways. Seterra Online also has a voice feature that helps you learn how to pronounce the names of countries, cities, and places correctly. The game includes over 400 maps in over 40 languages, including many that are relatively obscure. 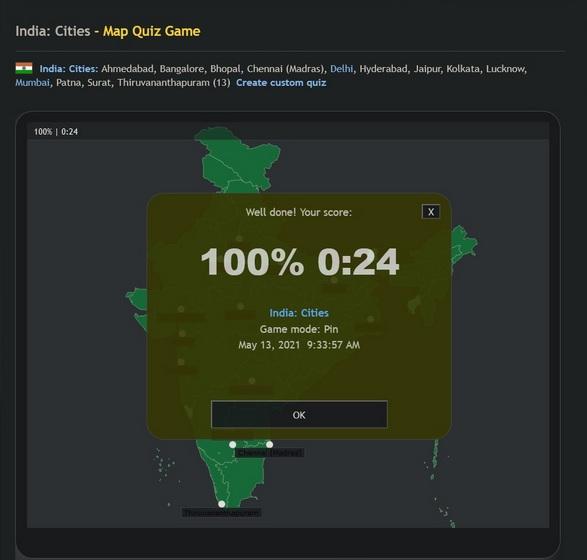 Seterra offers a web version for computers as well as Android and iOS mobile apps. All map quizzes are fully customizable, allowing you to choose only the locations that interest you. The United States, North and Central America, South America, Europe, Asia, Africa, Oceania, and the World are among the regions available. Custom quizzes can also be shared with friends, family, or students. Seterra is not only one of the best geography trivia and quiz games, but it also has a quiz called “Anatomy and Science” that teaches you more about the human body.

Hide & Seek World is a fun geography trivia game with a unique idea and a focus on multiplayer gameplay. It is divided into several turns, with one hider choosing a place somewhere in the world and 1-5 seekers attempting to guess the location using Google Street View photographs. Your goal as a hider is to choose a challenging place since the better the seekers predict your location, the fewer points you gain. If you guess better as a seeker, you gain more points. 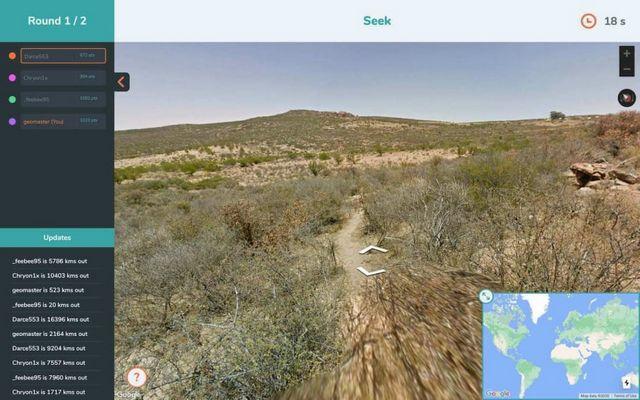 Hide & Seek World is based on the popular children’s game, except instead of using the real world, players use a virtual playground. That said, rather than simply your garden, closets, and attic, the entire world is now your playground. You can view each player’s guesses and how far they were from the hiding place at the end of each round. There are two game modes in this game: Street View and Satellite. You hide in Street View mode by selecting a street view location, however, in Satellite mode, you hide in a randomly zoomed-in area.

World Geography Games is a collection of fun and instructive quiz games for children, students, adults, and elders interested in learning about the world. The quizzes include questions about all of the countries and are useful “whether (they) are studying for an exam, looking for a free interactive whiteboard resource, or scouting for (their) next vacation destination,” according to the creators. In elementary school, high school, homeschooling, and tutoring, the game should also help teachers engage their pupils in an entertaining way. World Geography Games is a free game that puts your geography knowledge to the test. Quizzes about countries, continents, cities, flags, mountains, seas, rivers, deserts, volcanoes, islands, and more are available. Overall, it has more game kinds than GeoGuessr, but any type of 3D mapping or videos are conspicuously absent. Still, it’s a terrific free alternative to GeoGuessr that you should check out if you want to increase your geography knowledge without spending any money.

Zoomtastic is a great way to learn about different countries throughout the world, and it’s one of the best and most intriguing GeoGuessr alternatives. It’s a browser-based game that starts with a random country’s map. Once players see the map, which pans out slowly, giving you more information over time, they have 30 seconds to accurately estimate the location. After 10 seconds, you’ll be presented with four options from which to choose. You will receive 100 points for each accurate answer, but you will only have 30 seconds to answer each question. 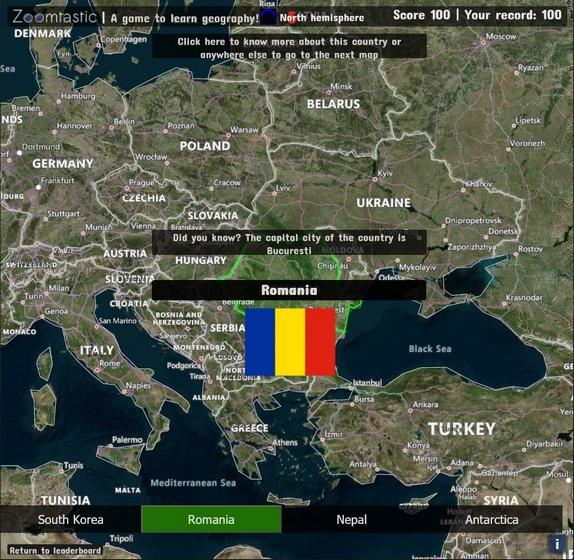 If you have a basic understanding of geography, Zoomtastic is a fun game to play, but it’s easy to see how it could be irritating for some. It also only has one game option, limiting you to guessing nations rather than cities, landmarks, or other locales. Furthermore, because the website is not mobile-friendly, this GeoGuessr alternative is better played on a PC. Overall, Zoomtastic is one of the finest free games for geography buffs, and the ‘Did You Know?’ answer at the conclusion of each question is a terrific opportunity to learn about different nations.

GuessWher Challenge is an Android-based immersive geo-challenge game. When you first start the game, it will practically transport you to any location on the earth. You’ll be shown a panorama and will have to determine where it is on a map. The more precise your guess, the more points you’ll receive. Each session consists of five rounds played in five distinct locations, with the goal of reaching the top of the scorecard and unlocking all achievements. 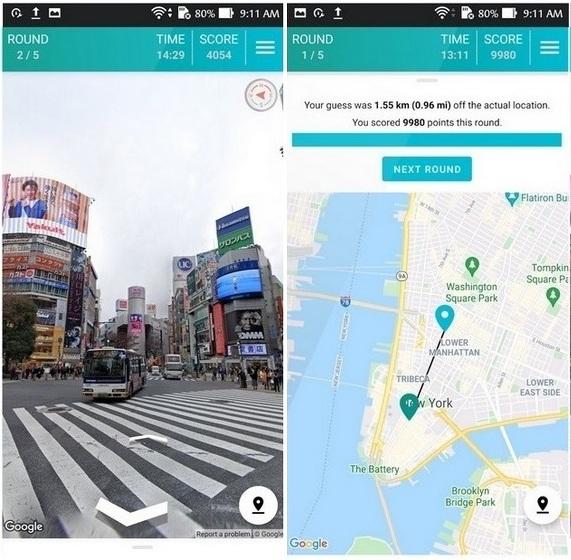 On Android, GuessWhere Challenge is one of the greatest free GeoGuessr alternatives. It allows players to put their geography knowledge to the test, virtually go to new locales, and accomplish various geo-challenges. Various game types provide a variety of location selections, such as cities, regions, and so on. Finding iconic monuments, landmarks, and remote locations on a map is one of the challenges. Finally, there’s a multiplayer feature where you may compete against strangers or your friends. Overall, if you’re seeking a free game similar to GeoGuessr, this is a must-try mobile game.

Ducksters is the final game on our list of the top free GeoGuessr alternatives. It’s a trivia and quiz game based on geography that covers numerous places throughout the world, including all of the continents, capitals, and country flags, among other things. It also includes state maps, capitals, and flags for all 50 states. This website also has mapping games, crossword puzzles, word hunts, and other activities. The puzzles are available in an active mode online or as a printable version for use in classrooms or at children’s parties. Ducksters also has geography word searches where you must locate all of the geographic terms for a region buried within the grid. The game also has an online version where you may compare your scores to those of other players. If you like, you can also play with printable offline maps and charts. Oceans, lakes, deserts, glaciers, islands, ecosystems, and other topics are covered in quizzes.

The game features quizzes on history, biography, science, and more, in addition to geography. There’s also a strange ‘Hangman’ challenge, in which you must guess the word before a stick figure is hung. It’s a gruesome and unneeded addition to a game that’s supposed to help kids learn geography. Regardless, I would recommend Ducksters for Kids as a wonderful free GeoGuessr option for kids.

Top 10 Best Farming Games Like Harvest Moon You Should Play