The Best Laptop Cooling Pads of 2021

Laptops are prone to overheating, especially when running demanding applications such as next-generation games and video editing software. The heat generated by repeatedly straining your system to its limits not only makes it uncomfortable to use on your lap, but also slows down performance, lowers stability, and can potentially damage components over time.

Using a cooling pad to keep your laptop’s temperature under control is the most convenient option to increase both longevity and performance. While they all try to accomplish the same goal, the various models differ in ways that affect how well they work for different people. That’s why we’ve compiled a list of the finest cooling pads for a variety of laptops, ranging from high-powered models designed for massive gaming rigs to small pads you can take anywhere.

Before we get started, keep in mind that you’ll need a USB 3 connection on your laptop or a USB wall adapter that puts out at least 5-10 watts if you want to run the fans at full speed, especially with more powerful cooling pads. The power output from USB 2 ports and low-power wall chargers is insufficient.

The fan speed and number of fans in use may both be adjusted from the front panel, allowing you to lower the volume when working on less demanding tasks. This is primarily to manage the noise level, which may become rather loud when all of the fans are operating at full capacity. 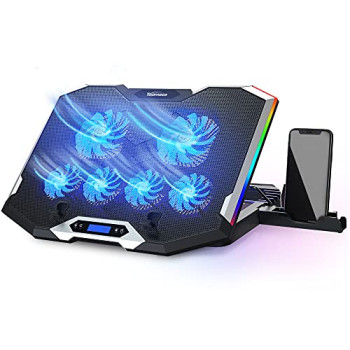 The C11 has RGB lighting to match a gamer’s other gear because it’s essentially a gaming cooling pad. If you prefer a more subtle look, you can turn this off using the same front panel. On the edge of the cooling pad is a handy (although flimsy) smartphone holder, so you won’t miss any critical alerts.

You may also use the two USB slots on the back of the pad to charge your phone or other mobile devices. The adaptability of the C11’s base is one of its greatest features, allowing you to tilt and lift the cooling pad to five different levels to find the ideal viewing position. The sturdy cushion is large enough to fit computers with screens up to 17.3 inches.

Because of its mix of great cooling power, outstanding height/tilt adjustments, ability to handle larger computers, and handy extras, the TopMate C11 is one of the best laptop cooling pads available.
It’s our #1 selection overall because it’s reasonably priced for everything it has to offer.

The TECKNET N11 is another excellent laptop cooling pad, and it’s often less expensive than some of the other kinds we’ve discussed.
Despite the lower price, it provides enough cooling and a variety of useful functions. A single huge fan in the centre is encircled by four slightly smaller fans on each corner, each spinning at up to 1500 RPM.

A control wheel on the side of the machine can be used to regulate the fan speed. The N11 provides adequate of cooling power for most computers, thanks to the pad’s mesh design, which promotes great airflow. The N11’s noise levels are also remarkably low, with maximum speed generating only around 43dB. A silent library, by comparison, is normally around 40dB. 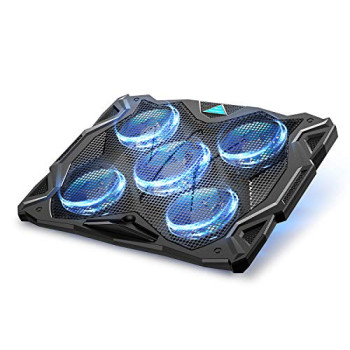 The N11’s base is strong and wide enough to accommodate a 17-inch laptop, which is more than most. The limited height adjustment range, on the other hand, did not impress us: with only two possibilities, you can only lift your laptop a few inches above the table surface at most.

The TECKNET N11 is a good alternative to our top pick, offering similar cooling performance at a lower cost. However, the lack of height adjustment is a tradeoff, so make sure you don’t need it before you commit.

With six high-speed fans spinning at 2900 RPM each, the IPOW 12-Mode Cooling Pad provides remarkable cooling power for today’s demanding games. Its mesh design increases airflow and heat redistribution while also increasing the unit’s cooling capacity. You may change the speed of the fans or turn them on/off individually using the LED panel. 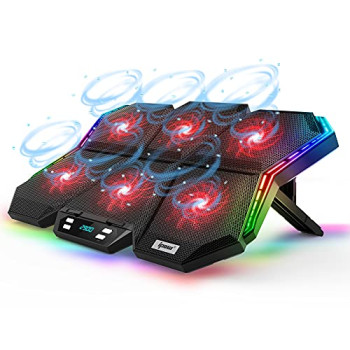 You may also use it to reduce noise, though you probably won’t need to: the fans are very quiet at around 30dB even at full speed. The IPOW has RGB illumination with 12 distinct settings, as you’d expect from a gamer-focused cooling pad, but you can turn them off if you want a more subtle approach.  The IPOW provides more options than most when it comes to staying comfortable during multi-hour gaming sessions, with up to seven height/tilt adjustment levels.

The only thing we don’t like is the pad’s width: 17-inch computers will likely stretch slightly beyond the base on each side, despite the IPOW’s claim to be suitable with this laptop size. Apart from that (literal) minor flaw, the IPOW 12-Mode cooling pad is all a gamer might want in a laptop cooling solution.

Do you want to save money? The Tendak cooling pad is a low-cost but adequate solution, featuring two huge 1400 RPM fans and a mesh design that should be enough to keep most casual users cool. The fans are controlled by a wheel on the rear of the pad.

With five height levels and the ability to tilt it to your favourite position, this cooling pad may also be used as a flexible laptop stand. The foundation supports up to 17-inch computers and features a built-in baffle to keep your laptop safe. When shifting the pad from one location to another, it is relatively light. 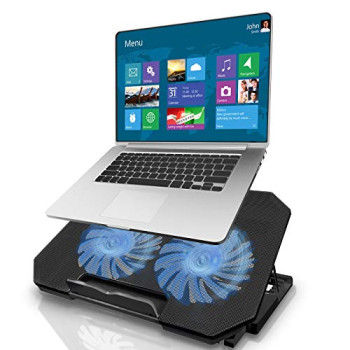 The Tendak’s plastic body is a touch fragile and cheap-feeling, but that’s to be expected at this price point. Overall, for remote workers who use their computers for lengthy periods of time, this is a nice cheap cooling pad alternative.

From CPU fans and liquid coolers to high-end laptop cooling pads, Thermaltake is known for producing amazing cooling solutions. The Massive 20 RGB is the greatest pad in the collection, especially for people with larger laptops. The cooling pad can hold up to 19-inch computers, making it one of the most spacious on the market.

The base is tough and long-lasting, but it’s surprisingly light for its size. That size, on the other hand, isn’t small, so don’t expect to throw this pad in your carry-on bag anytime soon. Unlike other cooling pads, the Massive 20 RGB uses a single massive fan rather than multiple smaller ones. 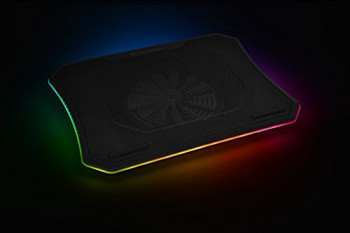 This has the benefit of being quieter than usual, but it also limit its performance. While it’s adequate for casual users, it’s tragically insufficient for most gaming laptops. The RGB lights, which are situated around the unit’s borders to offer a modest lighting effect, are a great addition. You have the option of turning them off or selecting one of five light levels.

However, when it comes to height modifications, this cooling pad falls short. It can only tilt 19 degrees away from the table surface, which isn’t much for most people. The Thermaltake Massive 20 RGB has a few hits and a few misses, preventing it from scoring higher on this list. However, if you have a really large laptop, there is no better cooling pad for the job.

One of the best thin cooling pads we’ve found so far is the Havit HV-F2056. It’s an excellent solution for digital nomads and anyone else who needs to cool their laptops on the fly because to its slim profile and light weight. Three fans spinning at 1100 RPM power the HV-F2056. 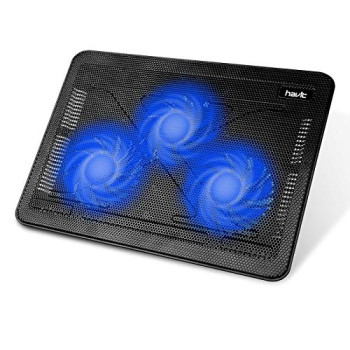 They produce 65 CFM (cubic feet per minute) of combined airflow, which is above normal for a pad of this size.The foundation is built of strong ABS plastic, despite its thinness.It includes an anti-skid surface that prevents the laptop from slipping, which is useful when you don’t have a sturdy surface on which to set the pad.

The HV-biggest F2056’s flaw is its restricted height adjustment, which makes it difficult to reach an appropriate position with it. Nonetheless, it’s a remarkably thin cooling pad with excellent cooling performance and portability.

Top 10 Best 3D Movies You Should Not Miss Out On

How to Install iTunes on Chromebook